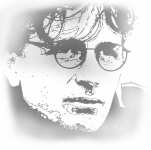 Mitro is a french painter born in Romania in 1957. After discovering and nourishing his passion for art since childhood, Mitro decided to join the Fine Arts Academy of Bucharest where he specialized in graphic art, painting, restoration, and sculpting. After graduating, he went on to have many exhibitions held in Romania.  Starting with 1982, he worked on restoring and decorating various museums, churches, and theatres. The year 1990 was a turning point for MITRO: he fled to France after the communist revolution of '89. He found himself falling in love with France and decided to settle down. MITRO discovered Venice very early on which became an inspiring city for him as an artist. Once settled in Normandy with his family, Mitro had to work hard during the day as a graphic designer in Paris and only painted at night. He would do so till 1995 when he decided to devote his time entirely to his craft. In the ’90s ten or so exhibitions put him in the limelight as a solo artist in France, Belgium, Switzerland, and Germany.  With the beginning of 2000, things accelerated with the recognition of MITRO as one of the greatest painters of his time. MITRO turns out to be a success story amongst national and international clients. Since then, many exhibitions have been held in France, Europe, and USA. His paintings nowadays are shown in private collections in the USA, Canada, Brasil, Mexico, South Africa, Singapore, Japan, The United Arab Emirates, and major European countries. Mitro also participated in several art fairs: Geneva (Switzerland) Houston, Miami, Los Angeles.