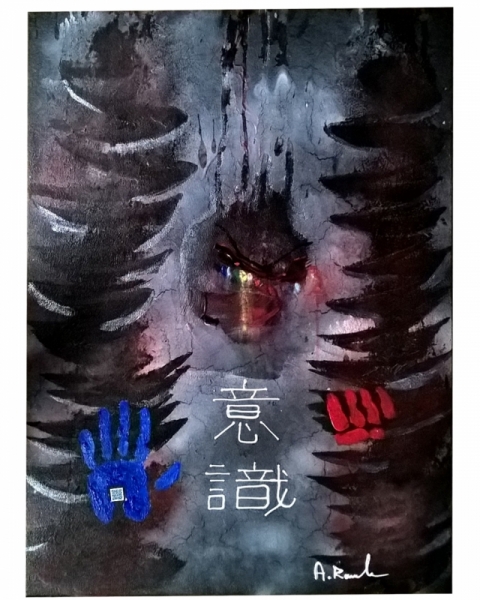 A Ravache painted this picture after the ceremony of homage to the dead in the attack of 13 November 2015 in Paris. This tribute will not remain in the memories and habits and French claimant apatriote quickly resume the above such that the natural change their spots in a few months and Reviews police resumed with a vengeance, the incensing of malgrès during this past Memorial Day. Arturo R here sends a strong message to the French, the overall dark color represents the pessimistic spirit of the French people, a head appears in the middle, the face of the consciousness of the French crying colors of the rainbow flag of peace, flayed by so much violence. This awareness speaks showing his hands on blue and red colors, marking his belonging to his people, asking with the open palm to stop all acts of fleeting demonstration, but to fight every day for the values &#8203;&#8203;of the republic by wearing a red fist as a weapon which would dampen spirits.
In his hands two Chinese characters written in a traditional Chinese meaning "yishi" for "conscience" as if the wise old civilization by some of the men asked us to reflect mindfully on our actions.

Protected by a UV satin varnish. The edges of the canvas are painted.
( If shipping, package carefully packaged to prevent damage to transport and insured up prices painting ).
A Certificate of Authenticity signed by the artist comes with the artwork.